My daughter looks exactly like her daddy. Which is okay, I guess. Because

But my attitude. She’s got it. And also my sense of humor. And my tendency to use song lyrics in conversations.

On Monday, she texted me to say that she was listening to Macklemore and could not escape. And because that sounded horrifying, I asked her where she was. And her response was to guess. With a clue: 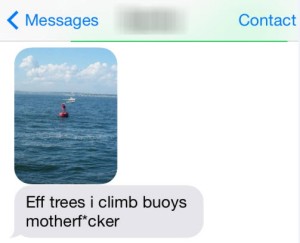 I really love my kids.

This was The Brat’s costume:

I spent almost an hour in Party City, with 500 bajillion other people because she waited until Saturday to tell me, “Oh, I *do* want to wear a costume to school on Monday”. So after a breakfast that included chicken and waffles (and an itis SO STRONG that I had to fight against it just so that I wouldn’t fall into a Rip Van Winkle-type sleep), we were off to find a costume that was both not ridiculously expensive and cute, but not slutty. The procedure: Go to the wall, pick out a costume, pray they have it in your size:

Me: Do you have the “Candy Corn Witch”?

Clerk: We only have it in an XL.

Me: But the wall says you have only XS…?

Me: Sigh… Brat, go look for another costume.

Me: They have this Little Red Riding hood costume in a size 3-5. So, it should be a little big, and hopefully not as short?

My Cell, around 7PM:

Brat: Um. I tried it on. I’m going to need leggings, or tights or SOMETHING*.

So I go to The Target, where THEY DON’T HAVE LEGGINGS IN ANY COLOR BUT BLACK, which WTH, Target?! I wander a round for a bit before I go to the kids section and grab the 14-16 size tights.

She’s also wearing her track shorts. Because she felt like she needed EXTRA protection so that her ass did not end up exposed.

Here’s the thing: I *know* that costume should’ve been bigger on her than it was because she’s a tiny little thang. LUCKILY, she IS small, so she *did* have some room. But not much. Also? This costume was clearly a teen costume. SO. WTF IS WRONG WITH YOU COSTUME PEOPLE?! WHY do you insist on trying to slut up every costume? WHEN did this become okay? Why can’t you make a costume REGULAR SIZED and with a DECENT LENGTH? In theory, these costumes should be able to be worn at school, right? Because MOST KIDS wear costumes to school on Halloween. But a lot of these costumes are fast getting to the point of not being appropriate. And if that is the case, THIS MEANS YOU WANT US TO SEND OUR YOUNG DAUGHTERS OUT IN TEENY TINY COSTUMES IN THE MIDDLE OF THE NIGHT TO ASK FOR TRICKS OR TREATS.

I’m thinking next year, I’ll be making a costume for The Brat. It’s getting to be too difficult to find a decent looking costume for a girl child. And because if this trend continues, I’m pretty sure next year all the costumes will be booby tassles and thongs.

*I sincerely hope this means that I’m doing something right, that The Brat requested help de-sluttifying her costume so that she could wear it? Please say yes.

**This rant brought to you by the fact that I’m old, and that I remember being able to wear a costume without needing to get waxed.Now, GET OFF MY LAWN.

On the way home, we were discussing all of the birthdays in October. Aside from The Brat and I doing some birthday bowling, we had been invited to several birthday parties just this weekend.

Me: Well, there are a lot of birthdays in October. January is a cold month.

Me: What? You’re MY birthday present. I got to come home from the hospital with you on MY birthday.

Brat: Nope. I am EXACTLY 9 months from Daddy’s birthday.

Because she is. EXACTLY.

I’m sure 16-ish years ago, they told me when I conceived. And I probably laughed then too, realizing that it meant that our birthday sex gave us both a birthday baby.

I just never really thought that SHE* had realized it too.

Who says you never use math in real life?