I ran THIS this weekend with Aaron. Because I talked him into it. And apparently, I don’t have any sense.

I would like y’all to know that there were Trojan fans manning the red and yellow powder. And they strategically made sure I was crimson and gold from head to toe. At least until I got to the green. I also took blue powder right to the face. Sidenote: I’m pretty sure they were getting a kick out of those face shots.

Still though. I had a good time.

Even though it was the rockiest trail in the history of rocky trails.

And my uterus was trying to fall out.

And I was maybe not quite HUNG OVER, BUT. Some asshole let me come to her house and hang out until almost midnight, while drinking up her Jamesons.

I also hugged Erin, after our dash because I totally forgot she was being interviewed for a magazine. Luckily she loves me. And Aaron had already hugged her on the other side, so at least this way she was even. No?

ANYWAYS, fun times had by all. I definitely give this weekend two thumbs WAY up.

I may say yes.

Part of my job is ordering supplies for our breakroom. It’s pretty fancy. It’s got everything you need in a breakroom, except food. You gotta bring your own food.

ANYWAYS, I got an email asking me to review some of the items that I ordered: Coffee, Sweetner…spoons. Really? You guys want me to give you a review on spoons?

Sidenote: It asked me to upload a picture, and I didn’t. I feel like I missed my opportunity to upload this picture (taken from deviantart – TigerofMyth) 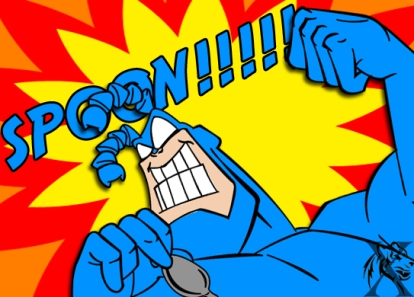 I feel like it screams, “I FUCKING LOVE SPOONS!”